The terms Oversteer and Understeer are commonly mentioned in motoring circles, but what exactly do they mean and what impact do they have on the handling of a vehicle. A well designed vehicle does not suddenly break into a skid. As a tyre approaches their traction limits, they tend to slip sideways across the road. The angle between the tyre's actual path and it's natural path is called it's SLIP ANGLE. This gives the driver advance warning that the front / rear of the car is in danger of breaking loose and starting to skid.

If the rear tyres approach the traction limit more rapidly than the front, the rear of the car will steer a wider path than the front wheels. This rotates the car more than the driver intended and if nothing is done to correct it, will result in the vehicle having a smaller turning radius. When this occurs, it is know as Oversteer. If the front tyres approach the traction limit more rapidly, this will result in the front of the vehicle taking a wider turning radius than the driver intended, This is regarded as Understeer.

Understeer is generally regarded as being safer than Oversteer. If a car understeers and no correction is made, the result is a wider corner than intended, but will not impact the stability of the vehicle. If a car oversteers , the turn made has a smaller radius than intended. The smaller radius results in greater cornering forces bringing the required traction even closer to the limit of the rear wheels thus causing even more oversteer. The situation will worsen until the rear wheels loose grip entirely causing the vehicle to spin and all directional control being lost. This is known as 'Snap Oversteer or Lift Off Oversteer'.

To fully understand the concept of handling, One needs to understand the basic forces that affect the chassis of a vehicle. These forces which act on the vehicle chassis are shown below 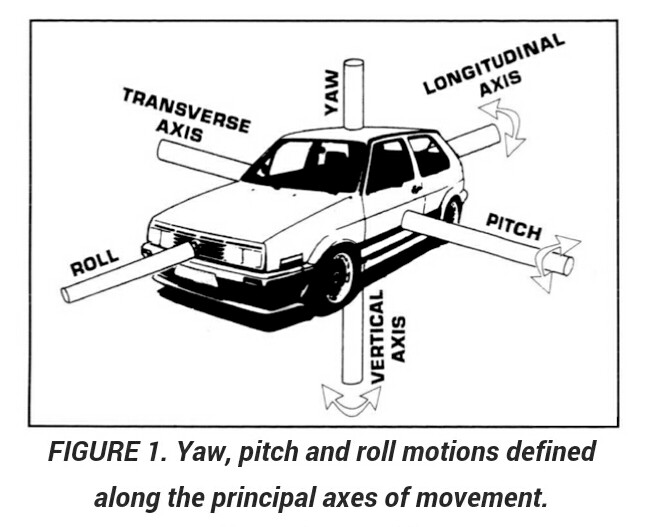 Oversteer occurs when a car turns more than expected. It is a phenomenon whereby the rear tyre's loose traction before the front during cornering. This causes the rear of the vehicle to slide towards the outside of the corner, creating the feeling that the car is trying to spin. Rear wheel drive vehicles are more prone to oversteering. This is because the rear tyre's are required to handle the both the lateral cornering forces as well as the engine torque, resulting in the rear tyre's approaching their traction limits more rapidly.